My Journey from Hercules to Mere Mortal–

and How Nearly Dying Saved My Life 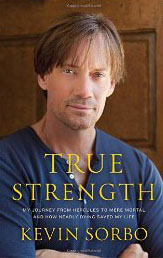 When Comic-Con comes around to San Diego, I’m often asked to “handle” the big Sci-Fi stars… which I’ve had the pleasure of working with Kevin Sorbo a few times. Driving him from his hotel to the convention center one trip, we chatted about his forthcoming book, mostly the title. This is a pretty down-to-earth guy, for being the son of Zeus and all … but we never talked about this traumatic experience.  This morning, Kevin was brilliantly interviewed on Access Hollywood, regarding his new book, and the before now untold story. This is a must-read — for anyone dealing with strokes, aneurysms, brain damage, loss of sight, and any of life’s health challenges. And if you didn’t know before, Kevin has a huge heart and founded the non-profit organization, A World Fit for Kids. He and wife Sam have three precious children and live in Southern California.
–Sheryl Roush

BOOK REVIEW:
Actor Kevin Sorbo played the title role in the popular action drama Hercules: The Legendary Journeys–at one time, the most-watched TV show in the world–for seven seasons. During the last couple of years he worked on the show, his physical strength was compromised by the aftereffects of three mini-strokes he suffered at the age of 38. After nearly a decade of keeping the details of his experience on a need-to-know basis, Sorbo tells the whole story publicly for the first time in this book. A lifelong athlete and former model, Sorbo seemed perfectly cast as the demigod Hercules, and he identified strongly with his part. Illness and weakness weren’t part of that picture. But when an aneurysm in his shoulder caused blood clots that damaged his left arm and the vision center of his brain, the medical challenges of recovery were complicated by his condition’s contrast with his Herculean (self-) image. Sorbo met his future wife, actress Sam Jenkins, on the set of Hercules just months before he had the strokes, and she’s one of several associates who contribute chapters to the memoir, discussing their own impressions of Sorbo during the period of his illness and recovery. Their depictions of the actor reinforce the impression he makes on the reader–affable, honest and hardworking at everything he undertakes, including getting his true strength back. His story is no mythic journey; it’s all too human, and well worth reading.
–Florinda Pendley Vasquez, blogger at The 3 R’s Blog: Reading, ‘Riting, and Randomness