Wisdom from a Military Mom: COACH

My son announced that he was joining the Army National Guard. He was 17 and a junior in high school. I didn’t know what the National Guard was, except that since 2001 they were fighting in Iraq and Afghanistan and helped during hurricanes. The thought of my son coming home in a coffin kept swirling in my head. Kenneth wanted us to talk to the recruiter. He couldn’t sign up if we didn’t sign the parental consent form. “Yeah,” I thought, “I’ve got the power.”

I don’t know how we ended up in the recruiter’s office. I know I didn’t want to be there, nor did my husband. We didn’t come from a military family and growing up we didn’t know anyone who joined the military. We moved from New York to north Florida, and this is where we had our first experience with people in the military. We lived near two, very large Navy bases. Several people in our community were in the Navy and a few were in the Army. I would see them wearing their uniforms.

In New York, we had a monthly ritual with our children. We would go into the city early on Saturday to the World Trade Towers. There was a great shopping atrium on the bottom of the Towers. We would have coffee, hot chocolate and croissants on the stairs and watch the Chinese brides get their pictures taken. The atrium was beautiful and made a beautiful backdrop for wedding photos. I still remember seeing the brides in these beautiful white gowns, white shoes and black stockings. They changed into traditional Chinese wedding gowns several times during their wedding day. The stockings were for their Chinese gowns. The American gowns were only for photos. After breakfast, we went across the street to Century 21, a great store, walked to Canal Street so Kenneth could buy his gadgets and gawk at the electronics, and then to Chinatown for lunch.

That is what we thought about on 9/11, our Saturday morning ritual. We thought about all the firefighters we knew who were fighting the fires, and who eventually died that day. Andrea, my daughter was sent home because she was so devastated. Kenneth seemed alright. Easy going is a good term for Kenneth. Never up or down, just steady.

Back in the recruiter’s office I was wondering how 9/11 affected him. “Is this why he is joining?” I ask myself. I’m sitting on a squishy couch, arms crossed; and, Kenneth is squeezed between me and his dad, whose arms are also crossed. We are not happy. The recruiter is happy, chirpy and in her uniform. She is very talkative. I’m cool and not talkative. She talks and talks and finally I say, “I don’t believe you.” She is surprised and quiet. Then she shares about her husband, and says he is a Captain in the Army and is now in Iraq. I ask for his email address. She declines my request. However, she is willing to ask him the questions that I want to ask. I tell her I want him to answer the following: “What is it like to be in the National Guard? Why is he in? Why does he stay?” She says she’ll let me know when he responds. I don’t believe her.

I am an overprotective Mom. I didn’t trust the recruiter and didn’t trust the Army. I decided to do some investigative reporting. I was going to learn the truth so I could say to my son “No, you can’t join because . . . ” As a motivational speaker, I travel a lot so I decided to use the travel opportunity to ask questions. I stopped every person I saw in uniform. If you were wearing a Veterans baseball cap I was going to talk to you. I brought many beers for soldiers, though I don’t drink, except for a glass of wine every six months or so. I was on a mission. I wanted to know. Why did you join? What do you get out of it and why do you stay in? Many were shy. Some were really animated. All shared five core themes. Over and over I heard them. They spell the word COACH.

C—Camaraderie
Everyone, female and male, mentioned the camaraderie.There is a sense of being part of something really important together. There is LOTS of laughter among military personal but there is also this deeper connection that crosses generations, wars and services. They belong together, to their unit, their battalion, their branch and their country.

O—Opportunities
Almost every person I spoke to shared about the opportunities they received. Young people 22-years-old in charge of budgets of over $5,000,000 and more. Many shared about the concept of promote to potential. You are given opportunities to manage projects, meet VIPs and do amazing acts of bravery because a superior is confident in your ability to get the job done—or there is no one else to do it. So, even if you don’t think you can do it, you have to accomplish the task.

A—Adventure with discipline
Going to different countries, meeting diverse people, and overcoming challenges with courage. Adventure was mentioned but always tied to discipline. Everyone described the power of discipline. They say the discipline taught to them to be adventurous.

C—Celebrate
Every promotion is a celebration, every award is acknowledged. Transfer of command, retirement and death are all honored and celebrated. There is an understanding that each phase of service is an honor and is celebrated. The medals and ribbons all have a purpose. There are clear times for celebration, as well as, times for focus and courage. Both are important.

H—Help a comrade
No solider will be left behind. Every person I spoke to became solemn about leaving a hurt soldier or fallen comrade. They would sacrifice themselves before they left someone behind. For those that lost their comrades and had to leave them behind there was deep, deep pain even after 30 years.

Of all the conversations I had—over 182—it was the dedication to their fellow soldiers that changed me and my decision to sign Kenneth’s papers. My son is my light and my joy; and, I would do anything in the world to protect him. I would go to the ends of the Earth to protect him from harm. The pain I felt when I thought about signing his papers tore my heart. However, after my interviews, I knew one thing for sure. That no matter what, if he was hurt or if something happened to him, his buddies would do everything they could to bring him home to me. They were are as dedicated to him and his buddies, as I would be. I wanted to him to experience COACH. And he wanted the experience.

My husband, David, and I proudly signed his papers and at seventeen my son, Kenneth R. Herbin became a United States Army National Guard Soldier. He has served for over six years and is becoming an officer. COACH has served him well.

~ Pegine Echevarria, Speaker, Author of Sometimes You Need to Kick Your Own Butt
www.pegine.com 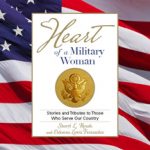 Full story submission in the Heart of a Military Woman book,
by Sheryl Roush and Eldonna Lewis Fernandez.
Reprinted with permission.