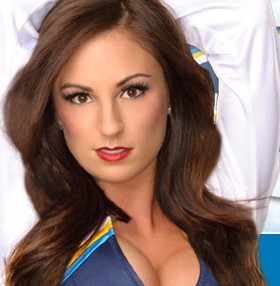 San Diego Charger Girl, Melissa Adams, overcomes adversity with the help of fellow teammates. In spite of being 85% deaf, she is able to dance and hold a beat with her 27 teammates, on the field, in front of 70,000 NFL Football fans.

Watch this inspiring story of the young lady who auditioned five times to become an award-winning professional cheer and dance performer, finally making the squad on her sixth attempt. She has since been a member of the team for two years – and made it on the front cover of the 2011-12 Charger Girls charity (Wounded Warriors) swimsuit calendar.

“As Melissa’s public speaking and media interview coach for the past two years she’s been on the squad, she’s truly an inspiration! She consistently steps up to the task, never letting fear – or doubt – be an option, commented Sheryl Roush, President of Sparkle Presentations, Inc., who has been coaching the Charger Girls for the past eleven seasons. “The Girls are the official Ambassadors for the Chargers organization; they know it, own it, and proudly represent San Diego football at all events, for media interviews, and public appearances. These beauties hold their own – speaking up intelligently and eloquently.”

For more information about the San Diego Charger Girls, the squad, NFL Game Day photos, and to purchase their Swimsuit Calendar, click here.
Follow the Charger Girls on Facebook.